05.03.2021: In another continuous effort to root out fake billing operations, the officials of the Central Commissioner of Goods and Services Tax (CGST), Delhi (East) had another success finding a huge network of fake companies to create and obtain fake input tax credits.

In this case, the fake companies were being operated by one Shri Naresh Dhoundiyal in connivance with one Shri Devender Kumar Goyal. Mr. Goyal is also a Charted Accountant by profession.

Mr. Naresh Dhaundial and Mr. Devender Kumar Goyal are both former employees of Essel Group Company. However, they are not currently officially working on the Essel Group. but they are sending ineligible ITCs to that group.

The Investigations indicated that a layer of genuine-looking fake intermediatory companies was created to pass on the fake ITC. This was done on the basis of non-existent and fake firms to the companies of Essel Group without actual supply of any goods or services.

This was purposely done to enable Essel Group to avail inadmissible ITC of GST and to book the expenses to evade the Income Tax. Also, it was done to inflate their turnover and to push the share prices of their listed companies.

Thus the entire fake chain has defrauded the Government’s exchequer for more than Rs. 392 crore by issuing fake invoices. Also, the invoices amounting to more than Rs. 3,000 crore are generated without actual supply of any goods or services which is likely to increase as the investigation progresses.

Therefore, It is relevant to mention here that M/s Vertilink Media Solutions Private Limited has admitted the evasion and has voluntarily deposited Rs 2.5 crore.

Thus, Shri Naresh Dhoundiyal and Shri Devender Kumar Goyal, CA committed offenses under Section 132(1)(b) and 132(1)(c) of the CGST Act, 2017. Hence such, commits are cognizable and non-bailable offenses as per the provisions of Section 132(5) and punishable under clause (i) of sub-section 1 of Section 132 of the Act.

Therefore, Shri Naresh Dhoundiyal and Shri Devender Kumar Goyal, CA have been arrested under Section 69(1) of the CGST Act, 2017. Also, they were produced before the Duty Magistrate on 04.03.2021. Later, the magistrate remanded them to judicial custody of 14 days till 18.03.2021.

Therefore, it is relevant here to mention that since the implementation of GST Central Tax, Delhi Zone has made 30 arrests in various cases involving GST evasion amounting to more than Rs. 4,450.86 crore.

These firms had taken the GST Input Tax Credit fraudulently of Rs. 12.90. Thus, the total value of invoices is approximating Rs. 72 crore. The ITC was availed on the basis of invoices issued by these non-existent firms. Similarly, there was no physical movement of material against these types of transactions.

The arrests were made on 30.12.2020 under Section 69 (1) of CGST Act, 2017. Later they were produced before the Metropolitan Magistrate, Patiala House Court, New Delhi on 30.12.2020. They are now remanded to Judicial Custody for 14 days. Also, further investigation in this matter is in progress.

23.05.2018: Central Tax, GST Delhi East commissionerate arrested a shahdara based father son-duo on 22.05.2018 in case of fraudulent issuance of input tax credit invoices involving evasion of approximately Rs. 28 crores relating to copper industry.  It is the first case of arrest in Delhi, under the new tax regime that came into force on 1st July, 2017.

Searches were conducted at several places during which various incriminating documents and evidence were found. Investigation that followed revealed involvement of the father and son. Both were arrested under section 69(1) of cgst act and honorable   CMM, Patiala house remanded them to judicial custody for 14 days.

As per section 132 of CGST ACT, issuance of an invoice or bill without supply of goods and wrongful availment or utilization of input tax credit is a cognizable and non-bailable offense if the amount involved is over Rs. 5 crores.

Further investigations are underway and the quantum of evasion is likely to go up.  Officers are not ruling out the possibility of existence of several other fake firms as the investigation moves ahead.

As per GST invoice rules Invoice shall contain the Unique Invoice serial number, registration number of the Recipient of Goods and Services. more

The input tax credit(ITC) shall be availed by a registered person, including the Input Service Distributor, on the basis of any of the following documents. more

The Input tax credit(ITC) in GST is available as a benefit to the entire chain involved in the cycle.  i.e from the starting point of manufacturer till the end consumer. more

Check out the latest today's news on GST in India. Follow the recent changes and updates made in CGST rules. Subscribe to the newsletter to receive updates in your inbox. more 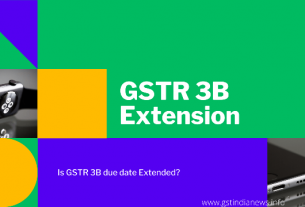